The How, When and Why of Model Releases 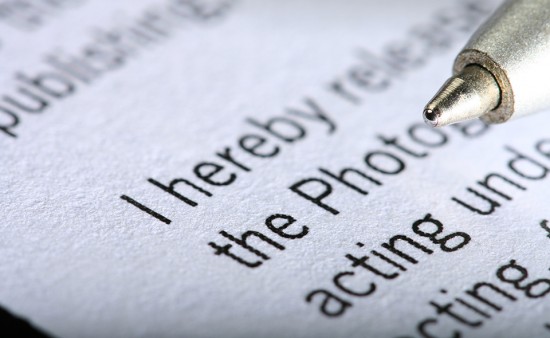 Whether you are a professional photographer or a hobbyist, it is important to follow several guidelines when working with models. It is also imperative for a photographer to have a clear understanding of what the word model means; although most people think of models as women or men who pose professionally, any person that you’re taking a photograph of is technically considered a model in the eyes of the law.

Model releases provide the photographer with the ability to sell photographs which contain images of people. A standard rule of thumb is that if the identity of a person in your photograph can easily be ascertained then you must obtain a signed model release, as most publications will require you to provide them with a copy of one. If the person in the photograph is under the age of 18 you will also need to provide a consent form that was signed by at least one parent or legal guardian. Due to pornography laws, if anyone in the photograph is nude or partially nude you’re also required by law to maintain a copy of their photo ID.

Photographers should ensure that they view the photo ID of every model that they work with to remove the possibility of receiving incorrect information on the model release. Make sure the release is signed by the model before the photo shoot begins. If you’re shooting multiple people at once, it is still a common practice to give each model their own model release. An exception to this guideline is typically made for families or bands, but make sure that each person’s name is listed on the release and that each person signs it.

Photographers who are shooting for editorial purposes, such as photos at a sporting event or of a celebrity out on the town, will not be required to obtain a model release to sell the resulting photographs as long as they are only selling them to places such as news outlets. While it is perfectly legal to photograph people in a public setting for editorial usage, it would be illegal to sell a photograph of someone for commercial purposes, such as an ad campaign, without written consent. When in doubt, always obtain a signed model release from everyone that you photograph.

If you are unsure of how to word a model release, a quick search on the Internet will provide you with several examples. Be sure to cross reference any legal language with the laws of your own state, as laws do vary greatly between different states and countries.

Which TIFF Image Compression to Use?The Nik Collection is Now Completely FreeNYPL - Free Public Domain Images and Other MediaDropBox for PhotographersAutomatically Watermark Photographs on Your BlogSelf-portraiture by Cat LaneNight Vision PhotographyUse Window Light to Add Character to Your PortraitsTaking Photos in Low Light ConditionsWhat Mode Should I Shoot In?